Heading off on a Canadian Bike Tour as the country celebrates and protests150 years of the big C. 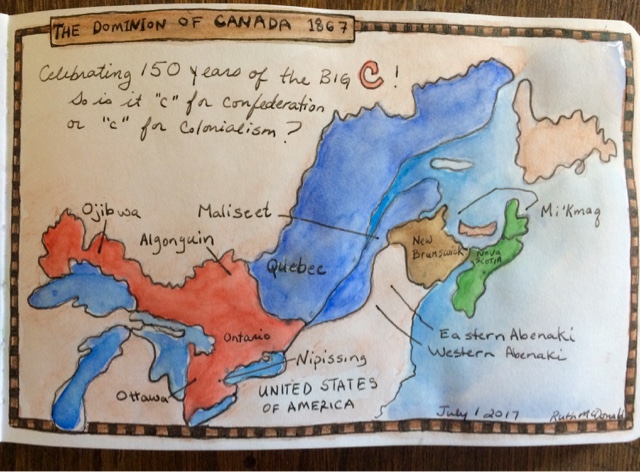 The 150th birthday party has started across the country, and what a time to start a bike trip through the area that was first called Canada. The festivities are already on, even in the places like Vancouver Island where Confederation didn't happen until 1871.  One hundred and fifty years ago Canada encompassed a much smaller area, with four provinces including a tiny Quebec and Ontario and the Maritime provinces of New Brunswick and Nova Scotia. The actual birth of Canada was a much longer labour that spans a historic period with indigenous roots, the pains of colonization and continued evolution as wave upon waves of immigrants arrived and settled here. The dynamism and multicultural evolution of Canada leaves some of us conflicted as we start to celebrate 150 years of - what exactly? Confederation or Colonialism?

Now I love a good party and I also am very proud to be a Canadian, but not in a traditionally nationalistic sense. Sure, I will put on my red t-shirt for July 1st, but it will be the one with Louis Riel's face on it not John A's. It took 106 years after Louis Riel was hanged as a traitor of Canada for the government of Canada to recognize him as the founder of the province of  Manitoba and perhaps even one of the architects of  Confederation. The fact that Canada's 150th birthday is controversial in this country makes me proud to be Canadian. I love that I live in a country where people can voice their opinions and not fear incarceration or death. I also think that although racism is alive and well in Canada, we have embraced our multicultural roots and, at least for the most part, try to get along with each other. We still have a long journey to go but with the truth and reconciliation process I think we are heading in a good direction.

Whether you are joining an Aboriginal protest, basking in the massive fireworks and live music, or sitting down to a great meal of Thairogies, have a wonderful Canada day.

Glossary
Thairogies: A fabulous dish of Thai sauces, veggies and pierogies. A perfect Canadian fusion food served out of a street food truck in Victoria.